Pet Nicknames...What Are Your Favorites? 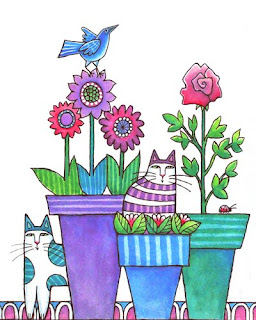 Thank you to Cat Lady Laura of Creativity Unmasked for featuring my Flower Garden Cat print on her blog today! Even more exciting was hearing the news that I won a month of free advertising on this lovely new blog. She will be having another giveaway beginning on March 15, so if you have a business to advertise, be sure to check it out.

Cat Lady Laura also happens to be a talented jewelry (or should I say "jewellery"--she's from Australia!) designer. To see her gorgeous work, be sure to visit her other blog, Moags and Smeet. Laura explains how her business got its name: "Laura (Moags) is supported by her partner Dan (Smeet) and our much loved pets Oli and Tig, our dalmatian and our mixed-breed rescue cat. Moags and Smeet are, in reality, Tig (Moags, Moagie, Mr Moagie Moags...) and Oli (Peety, Smeety, Mr Smeet...) but we have stolen their fun nicknames as our namesakes."

Do you have unusual or funny nicknames for your pets? Please share them in the comments section of this post!

Our first cat was named "Schultheiss'.
this is a medieval German name for a mayor. he has made its name.

Our second tomcat was named by the breeder 'Terry'. (official documents) I have never called him because I think these names is for a dog. We called him instead of 'Schnuppmann' or 'Schnuppi'
..because he smells (schnuppern) eternally long to his food before he ate it. ;)

Our siamese cat name is Tank, due to his hertiage I call him "Tankasmangus" which is Tank amoung us.
Molly is Tamolly.
PJ is Jammercat
Tabatha is Tubbycat
Thomas is Tomthemancan cat.

I am indeed a crazy cat lady, and proud of it. Thank you so very much for sharing the story of Moags and Smeet! I love all of the crazy names in the comments. Tig (the real Moags) is also referred to as Chairman Meow when he meowls to get his way. ~ Laura (Moags)

PS Your ad (along with all cycle one, two, and three giveaway winners) will be on the CU blog until the end of June - three months from the close of the final giveaway in March. Woohoo! :)

My six year old daughter (who perhaps knows more about Wee Folk than anyone around) says a good name for a Wee persons cat is
if it is a boy: Fidgie
if is is a girl: Gigi
She says your Wee folk is beautiful, and that her cat is lovely!
tracyschultz@yahoo.com

My furkids (cats and dogs) are with me for a long time and their nicknames sort of evolve in stages. For instance, Peja' is Paper, Payday, Paymaster, Lion King, and Gold Cat already, and he's only 2 years old. Probably the funniest is Sydney, who although very active, is a chunky-sort-of-guy. His many nicknames include Pork Chop, Pork, Chops, Porky and Fat Cat. Of course, I love them all dearly!

Oh my fur babies all have silly name's. I have a shitzu and she is named Cocoa...I call her Cocoa puff of fluff.
I have a little min pin named Fergie and I call her...Fergalicious,Ferganan or Fergie Lergie.
I have a black lab border collie mix named Jack...I call him Jack a Lewis, Or freckle nose.
Oh I love them all so much.
Love,Debbie

glad to have you back in the whimsy mix! 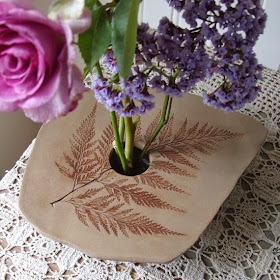 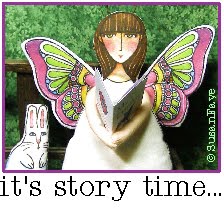 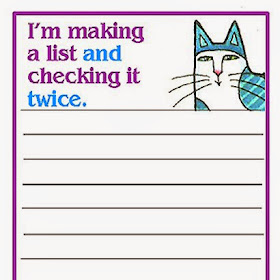 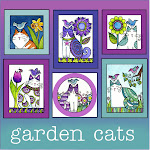 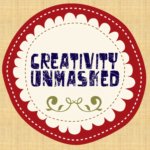